Piolo Pascual will fly off to Guam with his fellow Heartthrob, Sam Milby and the rest of the usual performers like Bea Alonzo, John Lloyd Cruz, Pokwang, and Gerald Anderson. The Heartthrob Guam concert will be held Phoenix Center at Father Duenas Memorial School in Tai, Chalan Pago. The show will be on October 30, 2010. Doors will open at 6:30 p.m., ad the show will begin at 8 p.m.

Metro Pacific Productions produces the show and tickets are sold at 120 per person for VIP; $60 and $30 for general admission. Tickets can be bought at iConnect stores, John B Supermarket, Laguna Restaurant, and Forex Cargo. You can call 988-8090 or 788-0620 for more information
Lähettänyt Maria klo 4:20 am No comments: 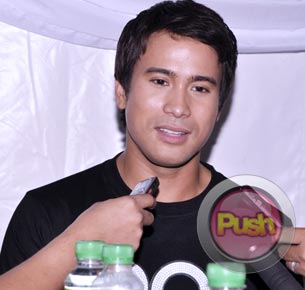 It’s been over two years since his last relationship, but Sam Milby admits he has yet to fall in love again. The Idol star, who was last linked to fellow actor Anne Curtis, says it’s not true he’s become choosier when it comes to love since it’s not hard to be attracted to someone in the industry. Even though the Fil-American heartthrob woud prefer to date someone outside of showbiz, he says it’s not impossible to fall in love again with a co-star. “I don’t see why not. Lalo na sa business na ito, ang daming magaganda, ang daming mababait,” he says.
..
Read more:
Sam Milby says he prefers to date a non-showbiz girl

Credits to owner
Lähettänyt Maria klo 2:56 am No comments:

Sam Milby on Marie Digby: "We decided to just be friends." | News | PEP.ph: The Number One Site for Philippine Showbiz 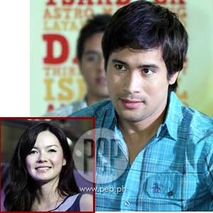 Sam Milby on Marie Digby: "We decided to just be friends."
Slideshow: Showbiz Photos
For his second indie film, Sam Milby will be playing a balikbayan for the 6th Cinema One Originals entry Third World Happy. Sam's first indie film is the action-suspense film Cul de Sac.
Directed by Edward James or EJ Salcedo, Third World Happy also stars Jodi Sta. Maria as the girlfriend who was left behind in the Philippines when Sam's character decided to go to the United States.
Sam describes his character Wesley as someone who is "manhid" and who has not yet moved on from the death of his parents.
Sam graced the press conference for the seven entries of the Cinema One digital film fest, which was held earlier today, October 26, at the 9501 restaurant located at the ABS-CBN compound in Quezon City.
JUST FRIENDS. Sam mentioned that he might see Marie Digby, the international singer being linked to him, in Japan when he goes there this week for the Heartthrobs and Friends tour.
"Actually, may tour kami sa Japan this Thursday and Friday. She's actually there now for an album that she's doing so baka magkita kami.
"But, actually, we're just friends. We decided to just be friends," he revealed.
Sam added, "Before, we were dating. But ngayon, we decided to be friends kasi mahirap ang long-distance...
"We had hopes it would work out. Hindi naman MU [mutual understanding], pero we have hopes na baka puwedeng mangyari. But mahirap talaga."
Did he feel hurt because of this decision?
"That's something I understood... Four times pa lang naman kami nagkita."
PEP (Philippine Entertainment Portal) asked Sam what he likes most about Marie and he disclosed, "She's honest and trustworthy. Kung sino ang boyfriend niya, wala kang duda. You will not have any doubts na may iba...
"Very truthful and very honest. Ang bait-bait sa lahat ng tao. She's one of the nicest people I ever met. She's someone I can rely on."
When it comes to matters of the heart, Sam has this philosophy: "Finding a perfect love is not about finding the perfect person. It's about loving an imperfect person perfectly."
NOT IN LOVE AGAIN. When asked why he hasn't had a love life recently, Sam Milby quipped, "All the good ones are taken... Joke! Ngayon lang natapos ang iDOL and I've been taping. So, walang time para makakilala ng ibang tao.
"Ngayon may time na, it's not something that I'm looking for. If it happens, it happens. If there's a spark with somebody, there's a spark with somebody."
Did he feel this so-called spark with Sarah Geronimo, his leading lady in iDOL?
"With Sarah, you get kilig naman while working with her," he replied.
Is he open to having a girlfriend who is also from the entertainment industry?
"I don't see why not. Lalo na sa business na ito, ang daming magaganda at ang daming mababait. I will admit that if you do have a showbiz relationship, mahirap.
"Sometimes you think, mas madali siguro pag non-showbiz na girlfriend. Gusto ko talaga non-showbiz girlfriend. But the fact is, I work with people in the industry. When you spend so much time with them, you can't help but fall in love with them."
If he does become involved with someone from showbiz, Sam said he won't keep it a secret.
"I think if it's from someone in showbiz, malalaman rin yun. And of course, the girl would want the guy to acknowledge her," said the matinee idol before he left the venue to attend to a fan's day scheduled that afternoon. 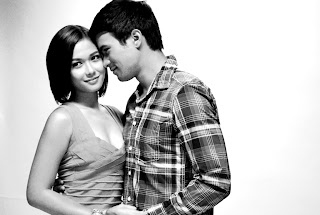 The Philippine Movie Press Club (PMPC) unveiled their nominees for this year’s Star Awards for Television.
The performance categories are dominated by kapamilya stars

KAPAMILYALOGY: Hearthrobs Concert in Tokyo: "For Filipino Kapamilyas in Japan, don't miss the chance to watch the first ever HEARTHROBS CONCERT in Tokyo, Japan on October 29, 2010! Cert..."
Lähettänyt Maria klo 1:50 am No comments: 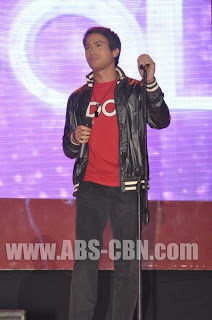 1Dol was Sams next work after Impostor. It was a musical comedy-drama series, witch premied the 6th of september and there was 35 episodes. The last episode was 22 October.

Sams role name was Vince. Other main parts are played by Sarah Geronimo (Billie/Jean) and Coco Martin (Lando). Just like in many Pinoy TV-series, also in this was channing storylines. Excitement,  romance and singing. Lot of singing, such as it should be in musical.

I love music, especially when I hear Sam singing. There were some beautiful duets with Sarah Geronimo like "To Love again" and "I need You back", which is my favorite. I think that these songs will live long time in our hearts. I will miss 1Dol.

I´m so happy. I could sing. I´ve met some new people through Twitter, thanks to Jeff, who is so kind. They are all very nice. Filipinos are warm, open-minded and hospitale. I learned it during these months. The common thing, why we start write to each other is, that we all love Sam. He´s the one, who is behind all this, that I´m here,  that I´m writing this blog, but he doesn´t know that. . There is so much people, who loves him. He have lot of fans, and it´s not surprise. He is kindhearted, handsome and very talented. He can sing, act, dance, play guitar and piano. And that´s not all. I think he can do anything. Se´s so incredible. 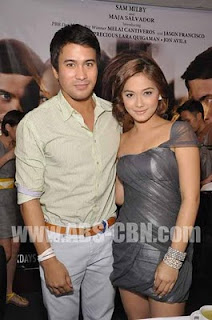 It all starts here. Impostor was the first tv-serie, witch I´ve seen, starring Maja Salvador and Sam Milby. There was also Melai Cantiveros and Jason Fransisco, who were also both great, in their first TV-serie after real-TV. It was script by Martha Cecilia. I watched all episodes and I was crying, when it ends. Sam was very manly and I almost fainted, when he kissed with Maja. He is truly The Prince of Romance. And Maja, so beautiful, so talent. I just love them both. So beautiful couple.

There was a lot of plot twists, excitemen and romance, but also humor time to time. Devin (Melai/Maja)  was an Impostor, who had changed her face after accident. She believed, that Mariz (also Maja) has died, so she presented as Mariz, Anthonys wife, to escape killers, who were after her.

Devin was a poor girl from fishing village. Now she was forced to live in a magnificent house as Anthonys wife. She fellt in love to Anthony, who was first so cold to her, cause real Mariz had betrayed him.  But Anthony, who though that Devin was real Mariz,  fell in love to her (again, as he though). Over time the truth was revealed to him, but he forgave to Devin. They loved each other. Just then, when everything was well, real Mariz returned and moved back to home....... The story had a happy ending. At last they got each other - I mean Anthony and Devin. Mariz were killed.

While watching Impostor, my emotions changes from weeping into joy. I was hooked. And I´m still hooked - to Sam. :)
Lähettänyt Maria klo 10:30 pm No comments:

"Hey everybody, here are the schedules for

the HEARTTHROBS AND FRIENDS TOUR..

The first blog, How it all began

I start to watch Pinoy Big Borther Double Up and finally ASAP, where my attention caught to Sam Milby. I fell in love instantly. Since then I have followed his career. He´s so gorgeous.

His first TV serie, which I saw was Impostor. Now I have watched almost all his TV-series and movies, I have found. My favorite is "And I love you so" with Bea Alonzo. Also "Babe I love You" with Anne Curtis and "You are The One" with Toni Gonzaga, are my favorites. I love romance and music. In Sam's films, these combines a brilliant way. I can only say that Sam Milby is awesome.

Now I have wrote with people, who lives in other side of the word. They all are Sam Milby fans, like me. They can follow Sams career much closer than I, so it´s great to write with them and discuss about Sam. Internet is a great invention. It allows you and me to connect with each other.
Lähettänyt Maria klo 1:11 am No comments: